Published in the journal "Science", a team of researchers describes a new signal transduction mechanism in the hippocampus.

The standard textbook opinion is fairly undisputed: nerve cells in the brain receive information via their dendrites (branch-like cytoplasmic extensions of a cell), transmitting and processing them in the cell body before generating a potential action in the so-called axon, which then sends the information to the nearest nerve cell. A new publication in the journal "Science" has revealed initial evidence showing that some nerve cells in the brain's memory center, the hippocampus of all places, do not conform. How do they do it and why?

In order to keep the brain physiologically functioning, normal neuronal networks are controlled by a working rhythm. Disrupting the system’s balance can result in significant disorders, such as epilepsy. The "standard nerve cell" is made up of finely branched dendrites resembling tree branches, serving as a type of ‘input station’ to receive signals from other cells, the cell body, and the arising axon, and generating an "all-or-nothing" signal, the so-called action potential. The axon transmits signals to the downstream nerve cell. The nerve cell receives activating and inhibitory signals via the dendrites and the cell body, which are then processed together in the cell body. Based on whether excitation or inhibition is predominant, to put it simply, the signals are transmitted or not, amplified or weakened. This is how the brain protects itself from ‘overloading’ since not every incoming impulse is equally important.

Discovering Blueprint Deviations
Researchers have discovered that about half of the neurons located in the hippocampus not only do not conform to this standard blueprint, but in some cases, there are even considerable deviations (see attached image). Researchers have shown in previous studies that about half of these "pyramidal cells" in the axon originate directly from a dendrite as opposed to the cell body. This is important as normally many of the inhibitory synapses are attached to the cell body itself, thereby influencing signal processing significantly. Directly inhibiting the cell body plays a key role in synchronizing signal processing and transmission between areas of the brain in, for example, in triggering resting periods. Accordingly, it is an important component of the aforementioned network’s ‘working rhythm’.

PD Dr. Martin Both and Univ. Prof. Dr. Maren Engelhardt elaborated: "The pyramidal cell’s axon does not originate in the cell body but further away at a dendrite; so we asked ourselves whether or not it can evade this important inhibition." The physiologist from Heidelberg and the JKU anatomy professor have worked together professionally for several years, contributing their respective expertise in anatomy and physiology to this interdisciplinary project that focuses primarily on nerve cells and their structural-functional relationships. So, what happens inside of a neuronal network once the nerve cells – referred to as "AcD cells" - become active?

Dr. Both and Prof. Engelhardt explained: "A 'signal short circuit' allows nerve cells containing an axon at the dendrite to bypass the activity rhythm imposed by the neuronal network." The incoming signals do not even pass through the cell body, which are down-regulated during resting phases, but rather they enter the axon directly, triggering an action potential faster and more directly. The researchers added: "The more inhibited the pyramidal cells are, the more important the mechanism seems to be. The reason is that only then are these special cells containing a dendrite-axon conduction active, while their ‘colleagues’ are asleep."

Just what kind of information is so important that it is passed on despite being in the resting phase? It is a mystery that researchers intend to explore further. The researchers suspect that this may be the brain’s way of ensuring that it retains important information.

The hippocampus’ anatomy and its connective functions could perhaps indicatively explain why so many AcD neurons seem to be there in particular. Mammals have two hippocampi, one on each side of the brain in the depth of the temporal lobe, playing a key role in transferring memories from short-term to long-term memory. They are also responsible for location memory. In addition, the two hippocampi synchronize the brain’s two hemispheres. The researchers speculated: "Perhaps the cells we studied are responsible for maintaining communication between the brain’s hemispheres."

Link to the paper:

Institute for Anatomy and Cell Biology

The JKU Faculty of Medicine 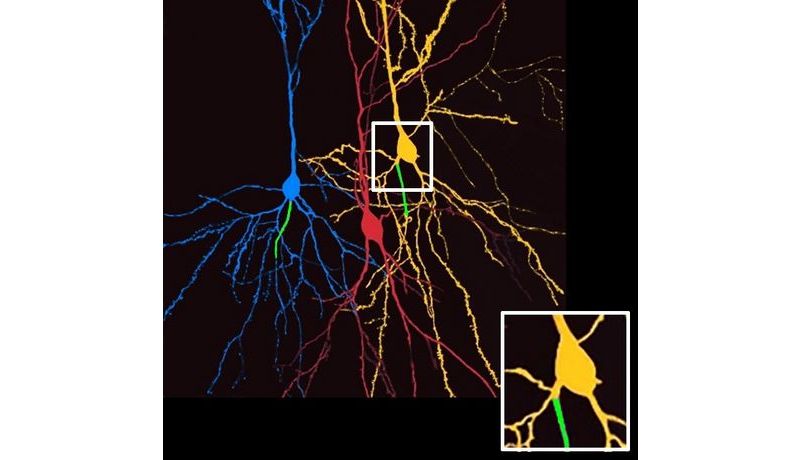 Three stained neurons in the hippocampus. The blue cell corresponds to ...