Our colleagues Julia Schwarz and Christian Paulik published a new article with the title `Modified Magnesium Alkyls for Ziegler–Natta Catalysts´ in the journal Catalysts (https://doi.org/10.3390/catal12090973, , opens an external URL in a new windowAccepted: 27.August.2022). 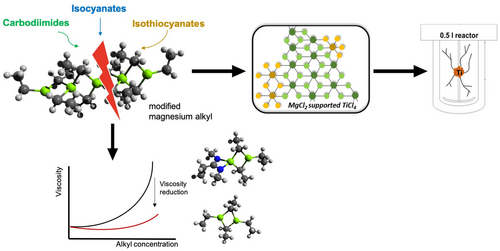 Magnesium alkyls such as butyl octyl magnesium and butyl ethyl magnesium are used as precursors for highly active and water-free magnesium chloride support materials for Ziegler–Natta catalysts. These alkyls show a high viscosity in hydrocarbon solvents which negatively affect their industrial application. Density functional theory (DFT) calculations supported the hypothesis that magnesium alkyls can form oligomeric chain structures responsible for the high viscosity. Heterocumulenes such as isocyanates, isothiocyanates and carbodiimides were studied as additives reducing the viscosity, supported by DFT calculations. The modified alkyls have further been tested in catalyst synthesis and in the polymerization of ethylene. The polymerization results showed high activities and similar polymer properties compared with a catalyst prepared without modified magnesium alkyl.

Our colleagues Viktoria Kreuzer, Klaus Bretterbauer and Clemens Schwarzinger have published an article with the title `Spectroscopic studies on the formation of different diastereomers in polyesters based on nadic acid´  in the International Journal of Polymer Analysis and Characterization ( https://doi.org/10.1080/1023666X.2022.2112642 , opens an external URL in a new windowAccepted: 26 August 2022).

Nadic acid-based polyesters were prepared by polycondensation with different diols and different stoichiometry of the monomers. Due to the four stereocenters of the acid component, four diastereomers can form in the polyester. The use of different alcohols and influence on the formation of diastereomers in the polyester was investigated. Identification of the stereoisomers has been done with 1D and 2D NMR spectroscopy, which revealed an influence of the diol component on their formation. Further structural elucidation was done by MALDI mass spectrometry and size exclusion chromatography. Another big influence of the diols was found on the glass transition temperatures, which ranged from −30 °C to 40 °C.

Abstract 1:
Chemical recycling of plastic waste has promise as a complementary technology to increase eco-efficiency of plastics life cycles. Accumulation of impurities in feed streams can affect sensitive compounds such as the Ziegler–Natta catalyst systems commonly used to produce polyolefins such as high density polyethylene (HDPE) and linear low density polyethylene (LLDPE). In a poison study, the influence of impurities—more specifically NO and N2O—on the catalyst system are investigated comprehensively in terms of kinetic behavior and activity rates. A product composition analysis gives insights into product properties such as molecular weight distribution (MWD), comonomer composition distribution (CCD), melting point, and crystallinity. By applying known modeling techniques (kinetic modeling, MWD, and CCD deconvolution modeling), information beyond analytical data is obtained. The results of the study show that both poisons significantly affect catalyst kinetics and reduce catalyst activity. N2O influences primarily the MWD, while NO poisoning strongly affects the CCD of LLDPE samples. Since the mechanical properties of the polymers produced depend on factors such as MWD and CCD, NO and N2O poisoning may reduce their processability and applicability.

The sustainability of consumer materials, such as plastics, belongs to the most important aspect of eco-efficiency analyses. Besides mechanical recycling, chemical recycling represents an interesting waste management pathway. In theory, this technique does not rely on single-grade feedstock to maintain product quality. However, cross-contamination of feedstocks potentially leads to above-specification impurities in obtained pyrolysis oils. This study investigates the potential downstream poisoning of a fourth-generation Ziegler-Natta catalyst, using selected model poisons at high (worst-case) concentrations. With experimental and computational analysis, economic feasibility factors such as catalyst activity and microstructural properties are evaluated during the synthesis of high-density polyethylene (HDPE) and linear low-density polyethylene (LLDPE). Noticeable effects on the catalyst activity can be observed when the poison interacts with the co-catalyst, whereas a lower impact is observed for interactions with the activated catalyst-co-catalyst complex. Molecular weight distribution (MWD) and comonomer composition distribution (CCD) modeling highlighted marginal to no polymer property changes caused by contaminants. Combined with the applicability of pyrolysis post-treatments, these observations show that chemical recycling can be a promising technique for post-consumer plastic waste treatment.