Time-resolved measurements at a magneto-tomographic demonstrator

n this thesis we experiment with a pipe which is filled with conducting liquid. Alternating current flows through it and the resulting alternating field induces voltages in the coils placed concentric around the pipe. These voltages are measured.
The experimental setup used is a result of a former thesis and was originally used to explore the possibility of determining the position of this pipe out of the induced voltages.
Now we make the next step and examine the influence of non--conduction objects placed in the fluid on the resulting magnetic field on the coil-positions and therefore the measured voltages.

At first, we position a non-conducting rod in the liquid and observe the resulting voltages. Then we add a dimension to the problem and replace the rod with a ball.
In addition to the experiments we also conduct simulations and calculations and compare them to the measurements.
At last, we move the ball vertically during measurement and determine its speed out of the measured voltage. 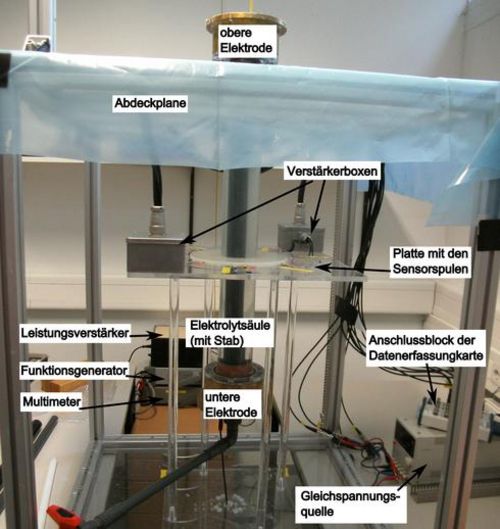 Figure 1: The alternating voltage between the elektrodes is generated by the waveform generator and amplified by the power amplifier. The multimeter measures the current through the pipe. The amplifiers in the grey boxes amplify the induced voltages of the coils. Their outputs are connected to the break-out box of the data acquisiton card. The DC power-supply supplies the amplifiers with the neede