Setup and Characterization of a Faraday magnetometer

Nowadays it is common to encode information using magnetic micro structures (magnetic stripes). The work at hand deals with a possibility for the quantitative measurement of the magnetic properties of such structures. For this task a Faraday magnetometer was designed and constructed. For the measurement a magneto-optical sensor from the company Matesy was used. The most important components of the magnetometer were characterized in order to evaluate the setup's limits in temporal, spatial, and amplitude resolution. The designed setup is visible in Figure 1.

The characterization focused on the light-source, the camera, the polarizers, and the Faraday crystal. 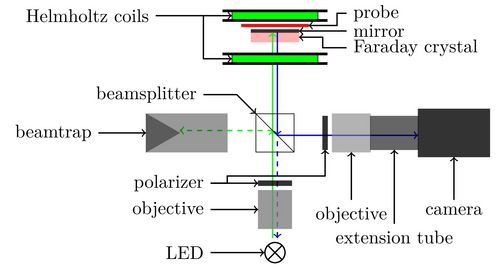 Figure 1: Design of the designed setup.

The light-source was analyzed with respect to its short and long term behavior.
The characterization of the camera showed that the long term behavior of the light-source is directly represented in the camera's output signal. Consequently, it was decided to measure the intensity of the illumination path in order to correct its influence on the camera's output. Furthermore, the camera was analyzed with respect to its SNR.
The Faraday crystal was characterized with respect to its macroscopic and microscopic behavior, applying a reference field with Helmholtz coils. In this analysis, a meander pattern, caused by magnetic domain structures, was observed, which limits the spatial resolution. The pattern can be seen in Figure 2.
Thereupon, the spatial resolution was analyzed using a two-dimensional Fourier transform.

The results of the characterization were then used to render the setup more accurate. In the end a measurement with the setup shows a 2-sigma-interval of plus/minus 0.0527 kA/m with a spatial resolution of 44x44 micrometer.

Overall, the characterization showed a clear interdependence of temporal, spatial, and amplitude resolution. This has to be taken into account when designing a Faraday magnetometer.