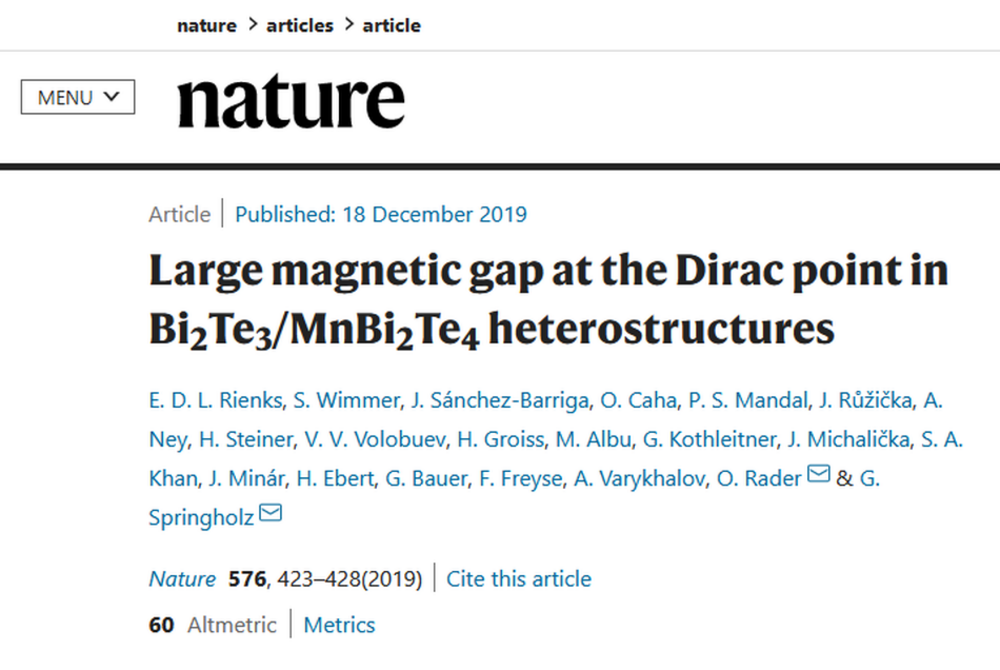 Magnetically doped topological insulators enable the quantum anomalous Hall effect (QAHE), which provides quantized edge states for lossless charge-transport applications. The edge states are hosted by a magnetic energy gap at the Dirac point, but hitherto all attempts to observe this gap directly have been unsuccessful. Observing the gap is considered to be essential to overcoming the limitations of the QAHE, which so far occurs only at temperatures that are one to two orders of
magnitude below the ferromagnetic Curie temperature, TC. Here we use lowtemperature photoelectron spectroscopy to unambiguously reveal the magnetic gap of Mn-doped Bi2Te3, which displays ferromagnetic out-of-plane spin texture and opens up only below TC. Surprisingly, our analysis reveals large gap sizes at 1 kelvin of up to 90 millielectronvolts, which is five times larger than theoretically predicted. Using multiscale analysis we show that this enhancement is due to a remarkable structure modification induced by Mn doping: instead of a disordered impurity system, a self-organized alternating sequence of MnBi2Te4 septuple and Bi2Te3 quintuple layers is formed. This enhances the wavefunction overlap and size of the magnetic gap. Mn-doped Bi2Se3 and Mn-doped Sb2Te3 form similar heterostructures, but for Bi2Se3 only a nonmagnetic gap is formed and the magnetization is in the surface plane. This is explained by the smaller spin–orbit interaction by comparison with Mn-doped Bi2Te3. Our findings provide insights that will be crucial in pushing lossless transport in topological insulators towards roomtemperature applications. 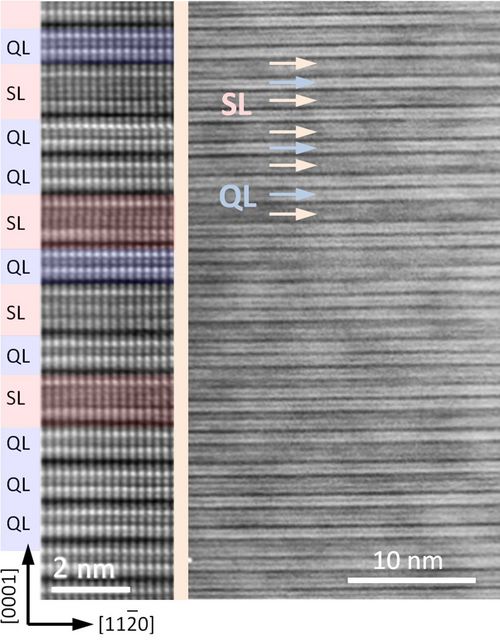 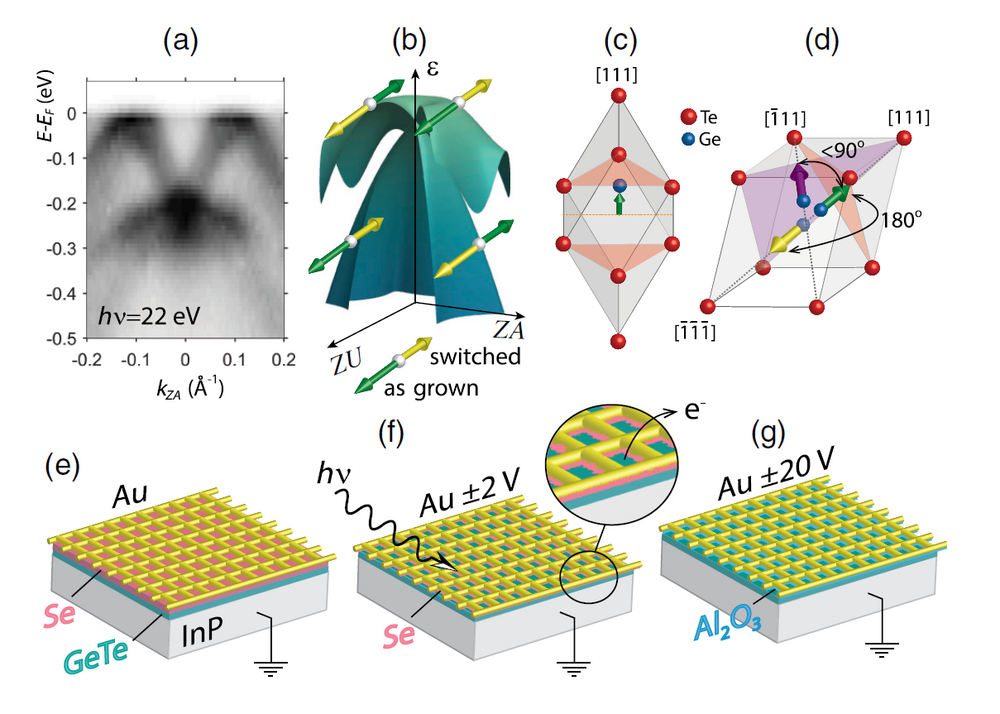 The control of the electron spin by external means is a key issue for spintronic devices. Using spin- and angle-resolved photoemission spectroscopy (SARPES) with three-dimensional spin detection, we demonstrate operando electrostatic spin manipulation in ferroelectric α−GeTe and multiferroic Ge1−xMnxTe. We demonstrate for the first time electrostatic spin manipulation in Rashba semiconductors due to ferroelectric polarization reversal. In multiferroic Ge1−xMnxTe operando SARPES reveals switching of the perpendicular spin component due to electric-field-induced magnetization reversal. This provides firm evidence of magnetoelectric coupling which opens up functionality with a multitude of spin-switching paths in which the magnetic and electric order parameters are coupled through ferroelastic relaxation paths. This work thus provides a new type of magnetoelectric switching intertwined with Rashba-Zeeman splitting in a multiferroic system.

The topological properties of lead‐tin chalcogenide topological crystalline insulators can be widely tuned by temperature and composition. It is shown that bulk Bi doping of epitaxial Pb1‐xSnxTe (111) films induces a giant Rashba splitting at the surface that can be tuned by the doping level. Tight binding calculations identify their origin as Fermi level pinning by trap states at the surface. 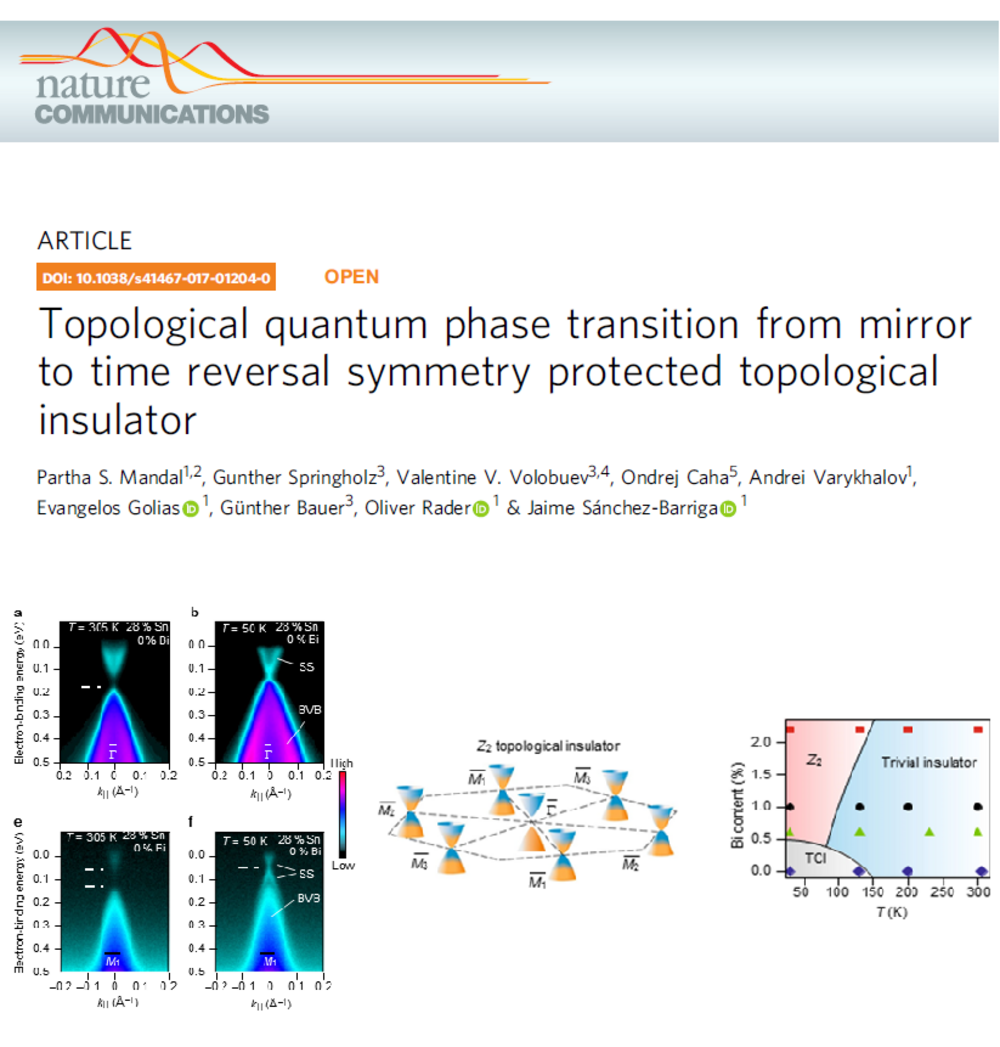 Negative longitudinal magnetoresistance is shown to occur in topological materials in the extreme quantum limit, when a magnetic field is applied parallel to the excitation current. We perform pulsed and DC field measurements on Pb1−xSnxSe epilayers where the topological state can be chemically tuned. The NLMR is observed in the topological state, but is suppressed and becomes positive when the system becomes trivial. In a topological material, the lowest N=0 conduction Landau level disperses down in energy as a function of increasing magnetic field, while the N=0 valence Landau level disperses upwards. Our work provides an explanation of the outstanding question of NLMR in topological insulators and establishes this effect as a possible hallmark of bulk conduction in topological matter.