Richard Küng is a computer scientist and physicist but above all, he is a mathematician. He actively conducts research on future-oriented topics, including quantum computers, at the Institute for Integrate Circuits. Küng was presented with his habilitation/post-doc certificate in the subject area of Theoretical Computer Science. His post-doctoral dissertation titled "Rigorous and Non-Asymptotic Theory Support for Near-Term Quantum Computers" reveals that quantum technology is already outperforming the top conventional supercomputers. Küng added: " ... only for the moment though, and as part of very specified challenges. The potential is there, however, and we just need to learn how to harness that potential."

Those pursuing a habilitation/post-doc undergo an academic evaluation in regard to special qualifications that proves their ability to independently conduct academic/scientific research and teach the entire depth and breadth of their selected subject area [facultas docendi], This, in turn, is the prerequisite to grant authorization to teach that particular subject area [venia legendi]. 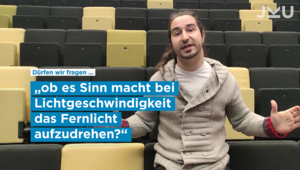 Can We Ask... Would It Make Sense to Turn High Beams Up to the Speed of Light?

We’re young, so we can: Gregor has asked our researchers to answer some of your questions! 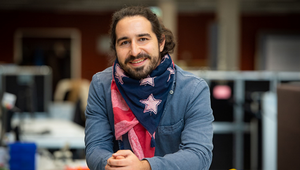 Richard Küng: A Man for all Seasons (Math, Physics and Computer Science)

What if you were 32 and getting job offers from Google, Amazon, and IBM? What would you choose? Why, the Johannes Kepler University Linz, of course.