The JKU Gets Science and Society Around the Table

Three projects under the motto "The Future We Want!" aim to actively focus on integrating the public into the research process.

The Johannes Kepler University Linz strongly believes that in the future, new forms of cooperation between science, academia, and the public will be essential. Under the motto "The Future We Want!", three projects are currently being implemented in an effort actively involve the public in the research process. We can also look forward to the Citizen Science Conference in April 2023 at the JKU Linz.

The Coronavirus pandemic made all of us acutely aware of the key role science plays in our society. The marked skepticism about science is a particularly worrisome development and now, more than ever before, it is important to build bridges between academia, science, and the public. In keeping with the "third mission" of universities, the JKU is aware of its social responsibility and, in addition to the current program (the Circus of Knowledge, the Kepler Salon, the Kepler Tribune, etc.), the university is also supporting a total of three JKU research projects incorporating social perspectives and academic expertise. In cooperation with the Ludwig Boltzmann Society, the initiated projects will be guided by the "The Future We Want!" Open Innovation in Science Lab at the JKU. The Austrian Citizen Science Conference is also scheduled to take place at the JKU in April 2023, offering a diverse program of presentations and workshops as well as opportunities for members of the public to talk and hold discussions with academics and scientists.

Christopher Lindinger, JKU Vice-Rector for Innovation and Researchers, remarked: "What kind of future do we want? In what areas do we want to see more digitalization, to what extent, and why? These are major questions concerning all of us, including the scientific community as well as the public. Thanks to a pioneering collaboration effort with the Ludwig Boltzmann Society, the JKU is creating flagship projects in which members of the public can work closely together with scientists and researchers. Both sides benefit as communication with ‘citizen scientists’ reveals more about problems, or introduces more creative ideas not found in scientific or academic literature. Members of the public, in turn, benefit by being given an opportunity to voice their own concerns and learn more about the scientific processes. This takes us out of a very outdated ‘ivory tower’."

Three JKU Research Projects Involving Members of the Public
The JKU’s Open Innovation in Science Impact Lab focuses on the population and its needs, addressing major challenges as we move toward the future we envision, ranging from the digital revolution to tackling the climate crisis. Under the motto "The Future We Want!", the Lab has issued a call to JKU academics and scientists to submit projects at the crossroads of people and technology, projects that benefit society, function in a transdisciplinary and interdisciplinary manner, and actively involve members of the public as part of the research process. At the beginning of 2022, an independent jury selected three projects. These projects are scheduled to start in 2022 during the early part of summer:

Explaining AI
The LIT Robopsychology Lab at the JKU (under the direction of Prof. Martina Mara) aims to create a participatory process to explore just how the general population can better understand artificial intelligence (AI), meaning, what kinds of questions can members of the public ask themselves about artificial intelligence as part of their everyday lives and how can answers to these questions be formulated. In order to develop an innovative format to explain AI, the project will involve three groups of co-researchers taking part in workshops: so-called ‘citizen scientists’ (i.e., members of the public), artists, and AI experts. The objective includes implementing concrete, innovative initiatives (such as a poster campaign, stage performance, etc.) to foster an understanding of AI within the population and evaluate in an impact study as to whether or not an increased understanding of AI results in fearing technology less.

Open Social Innovation – Re-thinking Social Innovation
As part of the project, the JKU Sustainable Transformation Lab (under the direction of Prof. Thomas Gegenhuber) and Volkshilfe of Upper Austria will come together to launch an Open Social Innovation process in the form of a public and collaborative competition involving various stakeholders (i.e., members of the public and representatives from charities, businesses, and government). At the start of the project, an open call will be announced in an effort to engage in specific topics (such as digitalization in [mobile] care). Those interested will then come together at an organized event (such as hackathon) to work on the challenges together, resulting in experts and members of the public coming together to communicate. The objective is to identify types of potential social innovation and subsequently support implementing selected ideas and initiatives.

VRImind! - Virtual Escape and Bringing Cancer Patients Together
The JKU Institute of Education and Psychology (Prof. Bernad Batinic, the) and the Department of Hematology and Internal Oncology at the Kepler University Hospital (JKU Chair Prof. Dr. med. Clemens A. Schmitt) have joined forces in support of the project "Virtual Reality (VR)”, giving those suffering from advanced stages of cancer an opportunity to escape the everyday struggles of their illness. As an innovative alternative to conventional imagination therapy (IT), VR-based imagination (VRI) as part of the VRImind! project could prove to be particularly effective in helping to alleviate patients' symptoms and strengthen their psychological defenses. Patients involved in the project use VR goggles to immerse themselves in a three-dimensional space accompanied by sounds. The project will involve focus groups in digital media technology, including experts from the Ars Electronica in Linz, experts in the virtual world game scene ("Metaverse" and others), representatives from self-help groups, and those currently affected, all of whom will be involved in the research process.

The Ludwig Boltzmann Gesellschaft is providing approximately €500,00 in funding for the three projects as well as methodological support. Initial results are expected by 2023.

The JKU is the Site for the 2023 Citizen Science Conference
The Citizen Science Conference will take place at the JKU between April 19 - 21, 2023, under the motto "ver.suchen - ver.einen - ver.antworten". Together with the "Österreich forscht" network (BOKU Vienna), and in cooperation with Ars Electronica and the Ludwig Boltzmann Society, the annual conference will be held in Linz next year in an effort to strengthen and raise the profile of public participation during the research process at the university, in Upper Austria, and as part of a network. Visitors can expect a wide-ranging program suitable for all ages.

Patricia Stark, head of the Open Innovation in Science Impact Lab, added: "These two projects initiated by the Vice-Rectorate for Innovation and Researchers set the course for future collaboration between the public and academia. On one hand, concrete projects turn members of the public into research contributors at the JKU and, on the other hand, the Austrian Citizen Science Conference provides a stage on campus for many other exciting projects, inviting interaction and networking between different parties." 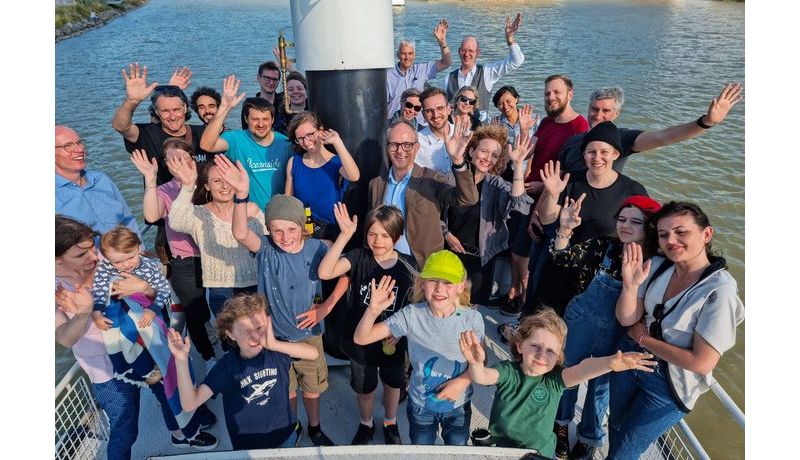 A group at “The Future We Want”; photo credit: eSeL.at - Joanna Pianka