A Global First: A New Type of Drone Can Track People in Densely Forested Areas in Real-Time

AOS is a special type of imaging technique that can suppress strong occlusion and make hidden targets visible in real time.

AOS is a sophisticated imaging method that can be used in real-time to suppress occlusion (meaning, for example, a canopy of leaves in the forest) from the aerial drone images and scientists at the JKU have recently made cutting-edge advances.

AOS captures multiple images in the air at different positions. To remove occlusion, these images are computationally combined, suppressing the occlusion and making hidden targets visible in the image.

Up to now, the only problem with the system is that it could only be used on stationary objects. Missing people and wild game are often in constant motion and even when using AOS, the level of technology at the time was unable to detect - much less track - these types of moving objects because sequentially capturing the individual images needed to calculate the projected forest path was taking much longer than the person, animal, or vehicle was moving. Fast-moving objects in particular were lost in the resulting images on account of motion blur, similar to long exposure time.

The JKU Institute of Computer Graphics (headed by Prof. Oliver Bimber) and the Institute of Lightweight Structures (headed by Prof. Martin Schagerl) have worked together to develop a new drone prototype. The prototype is a global first and can detect objects moving under densely forested areas, tracking these objects in real-time. Despite international efforts over the past several years to move in this direction, "through-foilage tracking" under realistic conditions was largely considered an unsolvable issue.

The drone prototype’s show-stopper is a nearly10-meter long extension made out of carbon and equipped with 10 light-weight cameras aligned to able to simultaneously capture images. The computational combination of images via the extension’s large synthetic aperture enables the occlusion to be calculated away at camera-shot speed, meaning in real-time. Initial experiments show that a color anomaly detector can detect and track people in densely covered areas of forest.

The project’s initial findings have now been published in the Science Partner Journal of Remote Sensing showing that not only is "through-foilage tracking" realistically possible, but also that AOS has significantly improved anomaly detection, which is often used to support automated image searching during search & rescue missions. 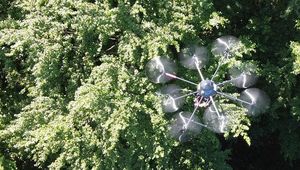 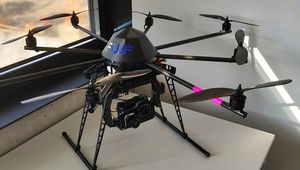 Drones Instead of Binoculars: Bird Count 4.0

A new camera drone uses "Airborne Optical Sectioning" (AOS) developed at the JKU to virtually "dissect" the forest and identify birds and nests. 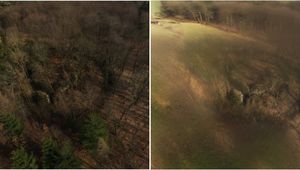