Worldwide QS University Ranking: JKU Linz Moves Up to No. 362 out of 5,500 Universities

The JKU moves up in the current U-Multirank ranking.

Over 5,500 universities from around the globe were assessed as part of this year’s QS World University Ranking. The standing for the top 1,000 universities are published and ranked.

The JKU is continuing its upward climb among the top listed universities, moving up 50 spots to rank 362, the Johannes Kepler University Linz’ highest spot to date in this ranking. The JKU’s research output in this international ranking was listed as "Very High".

JKU Rector Meinhard Lukas remarked: "We consider rankings differently, regardless of whether we move up or down. Universities that have very different conditions are compared according to a rough set of criteria. In any case, the outstanding position is a well-deserved acknowledgement in regard to the dedicated and creative work by our scientists. At the same time, it is an incentive as part of our enormous efforts toward becoming a leading European university. These efforts are reflected in our standing as part of the new QS World University Rankings."

The annual Quacquarelli Symonds (QS) World University Ranking assesses the top 1,002 international universities using six indicators. The strongest emphasis is placed on reputation surveys (Academic Reputation Survey 40% and Employer Reputation Survey 10%). Research is measured by the number of citations (20%) and education by the student-faculty ratio (20%). The percentage of international students and researchers is included at 5% each.

Moving Up in the U-Multirank Rankings
The indicators are graded starting with A ("Very good") to E ("Weak"). A total of 18 A and B indicators are good to very good marks for the JKU in an international and a national comparison.

With 3 A-indicators each, the university scored particularly well in the performance areas of "knowledge transfer" and "international orientation". The JKU also scored well in the "Research" category with two A and three B indicators each, building on its good ratings from the previous year in the area of "Regional Commitment". 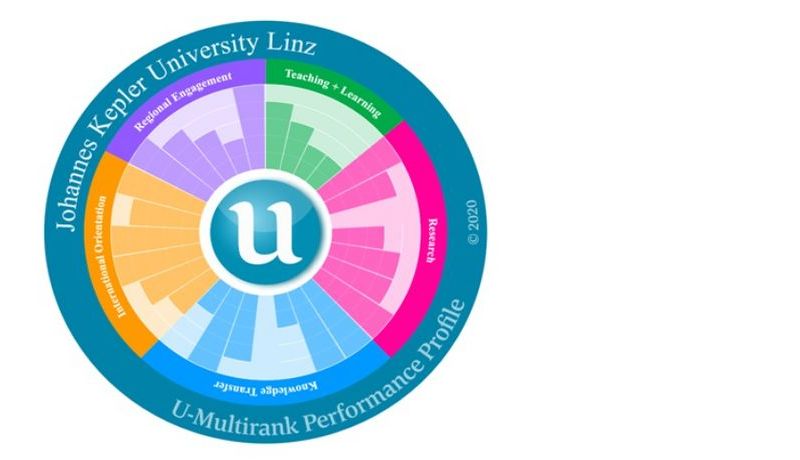 Multirank 2020
Back to overview
scroll to top