People are cleverly-constructed hydrogel systems: the brain, muscles and tendons are soft materials that are connected to hard materials such as bones in such a way that they form a soft, intelligent system. These types of systems serve as models for Dr. Martin Kaltenbrunner and his team, as they seek to develop a new generation of soft, adaptable and intelligent systems.

“When we look at people we can see that both hard and soft materials are needed in a highly-functional system,” says Kaltenbrunner. “The question is how to bring them together in an intelligent way, so that together they form a soft, functional system.”

Hydrogels have the advantage that they allow fluids to be transported, and connecting hydrogels to electronics –bioelectronics - is a new field of scientific study. This field is very promising for biomedical applications. For example, it may allow new solutions to be found to transport medication, bringing local anesthetics to where they are needed in the body. Sweat on the skin can be analyzed to determine lactate and glucose levels.

Additional possibilities include the integration of electronics into mobile health applications, e.g. the creation of a type of “smart” tattoo.

Currently, a number of large research groups are active in the bioelectronic field throughout the world, for example at MIT (USA), ETH Zurich (CH) and Cambridge (UK). “At our institute, we have often been the first to take initiative,” says Kaltenbrunner. “Our approach is then adopted and further developed by others.”

The first article based on the project’s research has already been published, in which the connection of hydrogels to other materials is examined.

Priv. Docent Dr. Martin Kaltenbrunner never initially intended to pursue a career in research, “... the basic lecture by Prof. Bauer was actually the reason why I ended up in physics.  The fact that I ended up becoming a researcher at his department was a stroke of luck for me.”

As an undergraduate in the second year of his Bachelor’s degree program, Prof. Kaltenbrunner was involved in a cover article presenting a new form of highly flexible, pressure-sensitive electronic skin in the “Applied Physics Letters”. Kaltenbrunner demonstrated touch sensor applications, which included activating a switch using pressure and a microphone as thin as a sheet of paper. This initial work on pressure-sensitive sensor films was considered by the scientific community to be a milestone in the development of electronic skin that responds to stimuli.

Other groundbreaking developments followed, including organic solar cells only one hundredth of the thickness of a sheet of paper that can be applied to capacitor films.  They are not only extremely light and flexible, but can also be stretched mechanically. Prof. Kaltenbrunner also developed the first stretchable battery and ultra-thin temperature sensor made of imperceptible plastic films.

Prof. Kaltenbrunner worked together with Professor Takao Someya at the University of Tokyo to develop an electronic sensor skin to be used in ultra-thin, light, large-area sensor fields and displays.

An ultra-flexible form of this kind of photonic sensor skin can also be used for mobile health applications.  In collaboration with Professor Zhigang Suo at Harvard University, methods for the production of renewable energies from waves and other mechanical movements have been developed using thin elastomer membranes.

Many Kaltenbrunner research findings have been published in top journals including Advanced Materials, Nature Communications and Science Advances.

After his post-doctoral studies at the University of Tokyo, he created the Soft Electronics Laboratory Group at the JKU's Department of Soft Matter Physics. 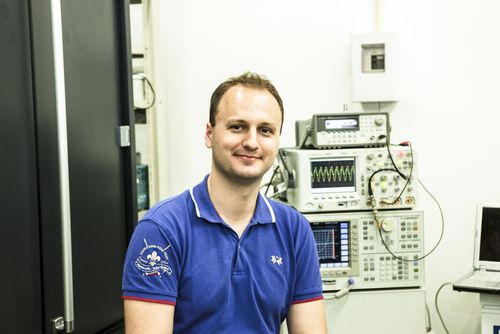