Since the founding of the research group, a large number of technical innovations and patents have emerged from the research work. Examples are the switched reluctance machine with permanent magnetic excitation, the radial and combi bearing equipped with permanent magnets, the bearingless motor with greatly reduced winding requirements or the bearingless segment motor for applications in the low-cost sector.

In 2007, the EU project "Competitiveness Upper Austria" was launched by the EU and the province of Upper Austria. As part of numerous research projects, the Institute for Electrical Drives and Power Electronics was part of this project, which focused on increasing competitiveness, growth and employment in Upper Austria.

The sister institute "JKU HOERBIGER Research Institute for Smart Actuators" was founded in 2010 with the friendly financial support of the HOERBIGER Foundation. Supported by a balance between basic and application-oriented research, efficient and dynamic actuators are the focus of scientific work here. They form an important pillar for the establishment and maintenance of technological excellence in industry.

Today, the Institute for Electrical Drives and Power Electronics can rely on a large number of competent, well-known partners at home and abroad and forms a close scientific and industrial cooperation with LCM GMBH.

The latest milestone of the institute together with LCM GMBH is the foundation of the K2 center "Symbiotic Mechatroics". Within the framework of this funding center, research is conducted in 4 "Areas", whereby the institute mainly moves and develops within the "Area Act". 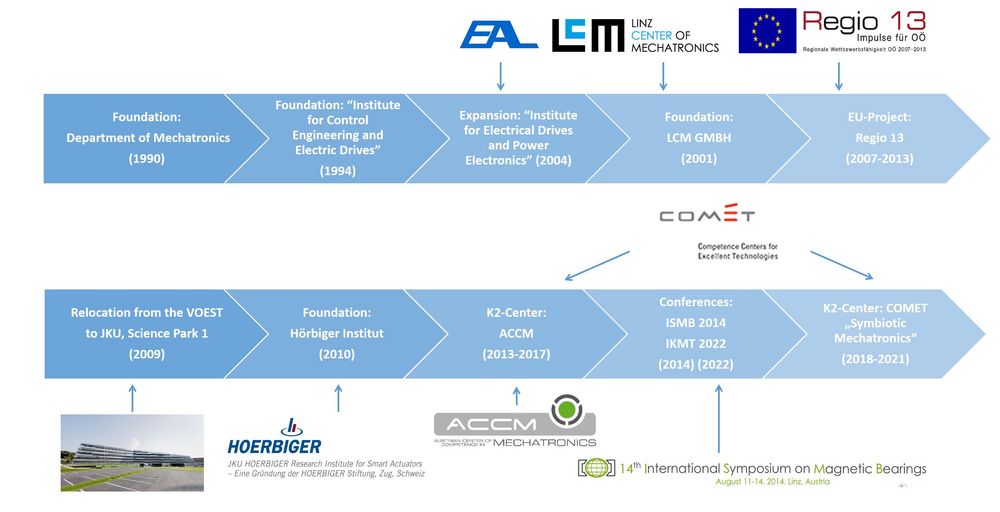