Despite constantly growing computing power, discrete element method (DEM) simulations of granular systems can hardly reach the time and length scales required to describe industrial applications. The coarse-grain (CG) model of the DEM alleviates the hardware requirements representing a number of particles by a coarser (pseudo) particle, thus effectively reducing the amount of particles involved in the calculations. However, due to the violation of geometric similarity introduced by the upscaling of particles, this approach fails for effects that intrinsically depend on particle size.

For processes operating at multiple length-scales, we thus have developed a technique which concurrently couples multiple different CG levels to adjust the resolution of the simulation as needed. Starting out with a coarse simulation of the overall system, finer resolved sub-regions are embedded successively where required. This design allows capturing the details of the particle system in spatially confined regions of interest while retaining the performance benefits of the CG method where a lower resolution is sufficient. The coupling of differently resolved DEM domains is established by exchanging volumetric properties of the granular flow to impose proper boundary conditions in each sub-region. Furthermore, the detailed information of the finer resolved parts of the simulation can be used to improve the overall behaviour of the coarser simulation by an analogous mechanism. The speedup of this multi-level coarse-grain (MLCG) model compared to a fully resolved simulation is nearly proportional to the saved number of particles. 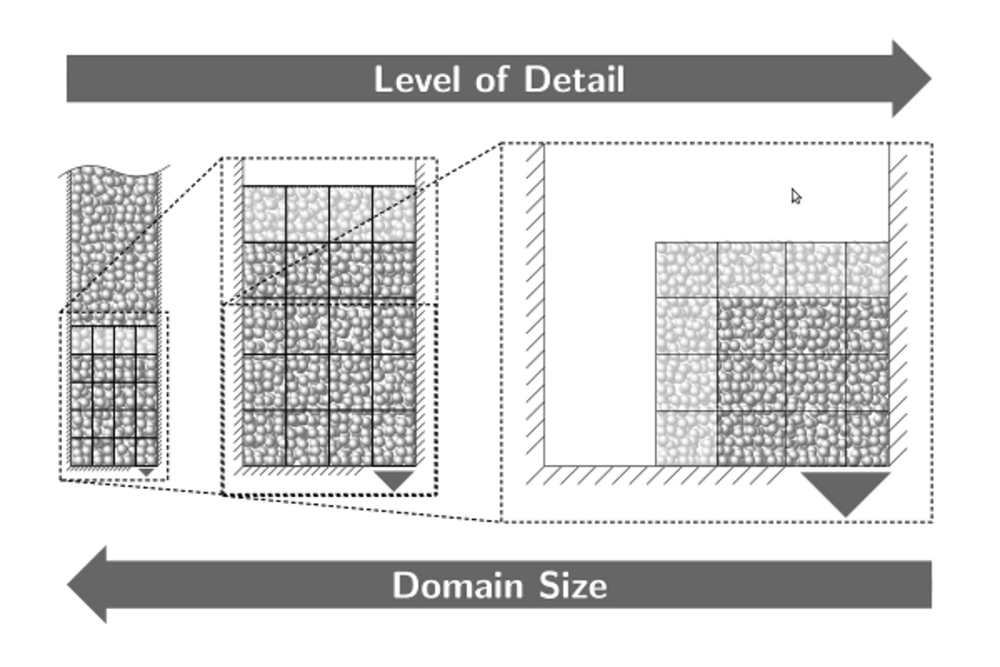 Granular materials with broad particle size distributions, in extreme cases ranging from macroscopic grains to sub-micron dust, pose a real challenge. Keeping track of each single constituent is out of question due to their huge numbers. However, fines can play a critical role, e.g. when they get trapped between larger particles and clog the pores of dense beds.

Two main questions need to be answered in this regard. How can one describe the transport, deposition and release of fines in a simple yet accurate way? What is their effect on the surrounding large particles and fluid flow, especially when they accumulate?

For clearly separated sizes, we describe fines as a continuous phase. Based on a force balance criterion, the local mean velocity of the fines-concentration field is obtained. Kinematic considerations are then used to determine the amounts of deposited/released material which in turn influences the bed’s local morphology and its resistance to fluid flow.

For broad or not-too-strongly separated size distributions, we introduce an "effective parcel model", where smaller particles are combined with larger ones into polydisperse parcels analogously to ordinary coarse graining where several particles of the same size constitute a grain. 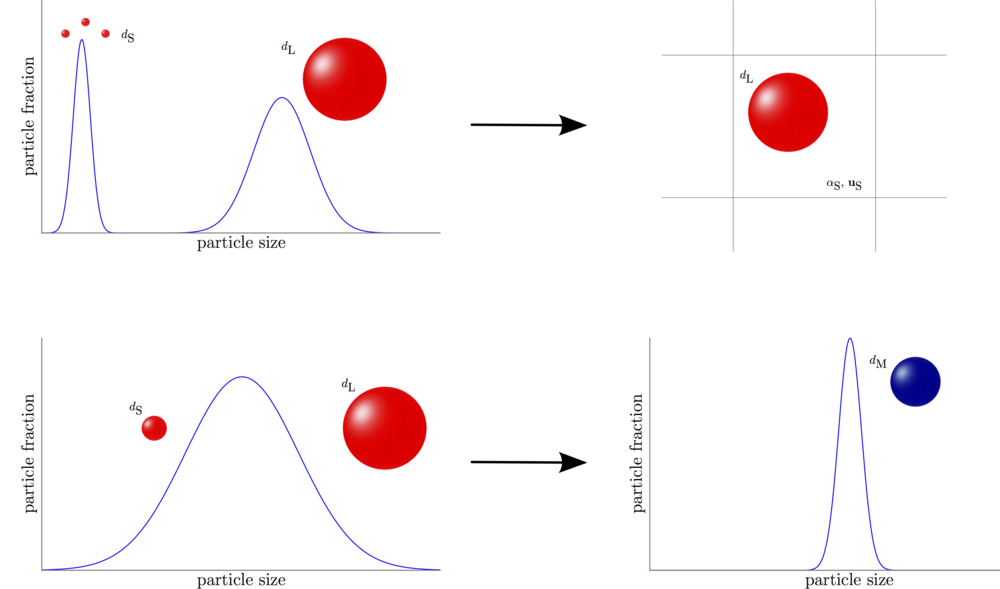