Our focus is to explore and push the limits of semiconductor nanostructures as scalable sources of single and entangled photon pairs for application in emerging quantum technologies. 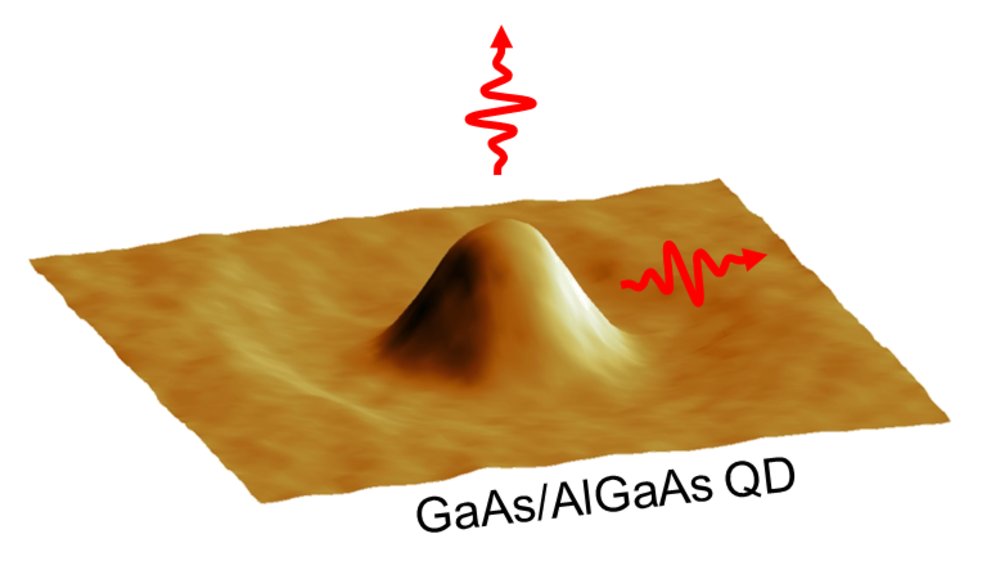 We mostly focus on GaAs QDs in AlGaAs matrix, which we grow by Molecular Beam Epitaxy (MBE) in the cleanroom of our institute. After having tried out different strategies over the past years (hierarchical self-assembly, Ga-droplet etching), we have selected Al-based droplet etching as the most promising route to produce high-quality QDs. The  main reasons are: 1) the whole fabrication process takes place at high temperature, minimizing the occurrence of crystal defects; 2) the QDs can be seamlessly embedded in photonic and optoelectronic structures similar to conventional InGaAs QDs in GaAs matrix, a property which have recently used to enhance light extraction and to achieve electrical injection; 3) the size of the QDs can be changed to achieve any desired wavelength in the range 680-805 nm; 4) QDs with high in-plane symmetry can be obtained, facilitating the generation of entangled photons; 5) the radiative recombination times can be substantially shorter than conventional QDs, which is beneficial for fast operation and generation of indistinguishable and entangled photons.

To control the properties of the QDs after growth we have been exploring different strategies ranging from permanent tuning via laser annealing to reversible tuning via electric fields and piezoelectric-induced strains. Post-growth strain engineering is a powerful method to control the emission wavelength of QDs, for instance in light-emitting diodes, and to obtain highly-entangled photons from QDs by removing the effect of residual asymmetries. Besides using commercially available piezoelectric substrates, we have patented microstructured piezoelectric actuators, which allow the in-plane stress tensor of a semiconductor membrane to be fully controlled. This has allowed the demonstration of a QD-based wavelength-tunable source of entangled photons. With such a method we envision the possibility of using separate sources to build-up quantum-relays. As a first step in this direction, we have performed two-photon interference between photons emitted by two separate QDs.

GaAs QDs are also ideally suited for fundamental studies, as their structural properties can be conveniently obtained from scanning probe microscopy and they are practically unstrained. Combined with post-growth strain engineering, the optical selection rules for excitons confined in these QDs can be widely tuned to match specific applications.